In 1492, Columbus Sailed the Ocean Blue 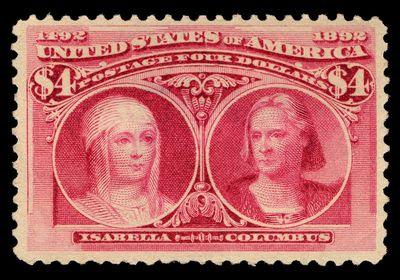 Happy Columbus Day! This is the day we celebrate the opening of the Americas to on-going settlement and trade during the Age of Discovery with the voyages of Christopher Columbus. Thanks to angel investor Queen Isabella of Spain, the venture was funded and the world changed forever. Columbus' discovery brought knowledge of the New World into the modern age 500 years ago.

Did you know that Queen Isabella was the first identified woman featured on a US Postage stamp? In 1893, she was given equal billing with Columbus for the success of the mission on the first commemorative US stamps ever issued for the Columbian Exposition in 1893, and is shown hearing the plan, pledging her jewels to fund the first voyage, meeting Native American Indian Ambassadors who visited her court... there were 16 stamps in the series and she is on 7 of them.

This series of postage stamps is a short course in American exploration history in vivid imagery. 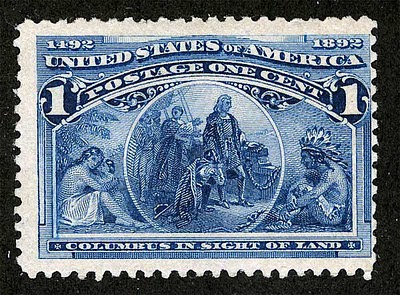 Coming less than 50 years after stamps were first invented (Queen Victoria was on the "Penny Black" for decades), the Columbian stamps were the first to deviate from the habit of treating stamps like other kinds of paper money and coins which depicted only monarchs, presidents and national ideals. Commemorative coins honoring Isabella and Columbus were also minted for the Exposition. (the history of US Commemorative coins, dates of issuance and persons honored is also very interesting.)

The 1893 series also pictured a Native American Indian family of husband, wife, and baby, Native American Ambassadors meeting Queen Isabella in Spain, the Catholic priest credited with celebrating the first Mass and building the first Church in the New World (although if you recall, Leif Erikson was a recently converted Christian when he arrived, so such firsts may be qualified), many different cultures represented at the Spanish Court, Columbus' own brother, and historical persons who were a part of the crew or the events pictured.

There are some great resources over at Stamps.org for history buffs and beginning collectors.

Some recent accounts, encyclopedia entries, and condensed articles on other topics may overlook, downplay, or word-play the presence on US Postage stamps of various persons pictured as early as 1893, but our forebearers were welcoming, even if we don't often hear about it. The "melting pot" has always embraced the full contingent of people from such different backgrounds for the part they played in making America.
Posted by Tina at 5:17 PM