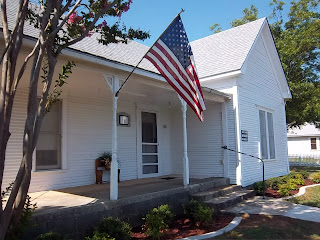 A couple of weeks ago, we went to Cross Plains, Texas, and toured the Robert E Howard home as part of their "Barbarian Days Festival".  Howard's father was Dr. Isaac M. Howard. This simple frame house served as the family home, and, also, sometimes, doubled as Dr Howard's office where patients were seen. The home was continually in use as a place to live for various families from the time Dr Howard sold it until Cross Plains' Operation Pride recovered it for preservation in 1989. 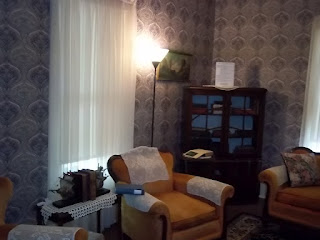 Since that time, they have worked to furnish it with period furnishings and house those artifacts they can obtain (such as the camel inkwell that stood on Howard's desk - a gift from Cecil Lotief, local Cross Plains  dry goods merchant - and first Texas legislator who had been born in Lebanon. He was first elected in 1932). Other furnishings are close copies of items either known to have been there, or true to the period.  Below is a photo of Bob Howard in front of this house, circa 1925. 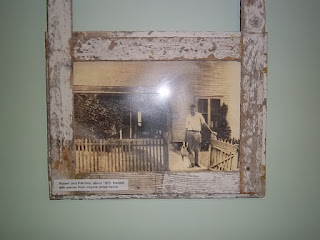 My main interest was that I enjoy touring simple historical homes: the kind of house in which ordinary citizens lived a hundred years ago. In this case, the home of an ordinary small-town family physician. During that epoch in American history, there were similarities among all Americans of frugality, economy of space and furnishings, and natural closeness of proximity to household members and neighbors, that is readily apparent when we walk through such a home and consider how life would be lived in it.

By today's standards, the author's cell-like bedroom/study (below) is tiny, cramped, and simple. But by the standards of the day (continuing even up into the 1970s in most of the country), it was probably much like the rooms of Howard's own unmarried peers. The room offered simple comfort, privacy, a bright and airy place in which to write and attend to the voluminous correspondence an author would keep up in that era when postcards and letters would be mailed daily for the same purposes email and messaging would serve today.

The bare bulb was a common feature of most homes until new homes built in the prosperous 1950s and 60s popularized inexpensive, built-in light fixtures. My grandmother's house had several while I was growing up.  Our current house still had bare bulbs in the mid-1940s during WWII, when Rita's family first moved here, and it was the first time they had electricity. This house at that time had 4 rooms - and her family rented one of them out to a soldier and his wife, who kept all their household goods in that one small bedroom, brought pots out to cook and went back into their room to eat their meals! This gives an idea of how economically indoor space was used during these earlier eras. 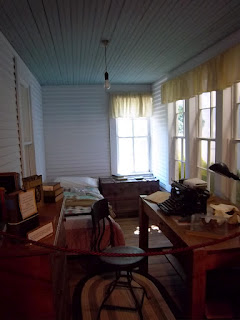 Porches were converted into bedrooms more often than not - and existing windows and doors were just left intact. During pre-electric times, such windows and doors still had use for ventilation and light, just like the transoms found above interior doors in so many old homes. If not needed to carry daylight and breezes, these unused windows and doors were often covered permanently with a heavy curtain or drape to block light and drafts, and furniture would be placed in front of it as though it were a solid wall.

My mother's house, of similar or slightly earlier vintage as this one, has two such converted porches: one very similar to this one resulted in her kitchen having a window-to-nowhere (well, technically, a window-into-the-next-room). Her kitchen also has another window that faces into the remaining screened "sleeping porch" that could have been, if needed, similarly converted. The other converted porch left a door-to-nowhere behind the sofa in her living room (but alas, there is no "door into summer"!).

Not only were bedrooms added to accommodate growing families, but also young adults tended to live at home until they married, and were given their own space by adding a room or converting a porch. Our house has a converted porch that we now use as the laundry room. but which once turned a crowded 4-room house into a three-bedroom home  and housed a family's sons, who had previously slept in the living room.

From the back, it is each to see the flat roof of the addition - also very common for what is known as "lean-to" add-ons. Our house has a similar flat roof over the portion added in the 1970s. 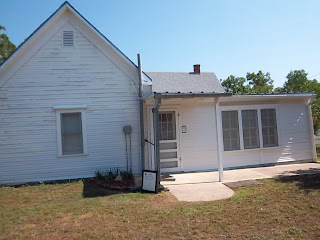 I was particularly interested to see the plate block for Dr. Howard's original bookplate (or Ex Libris as some call them). It is a linoleum cut and bears the doctor's own signature. A corresponding print from it is framed with it, but I couldn't tell whether the plate was designed to make prints onto gummed paper for application, or to print directly onto a book's fore-leaf. 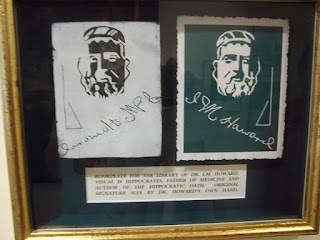 The docents at the museum, all members of Cross Plains' Project Pride, were wonderful, and I appreciated their friendly guidance through the tour. Here is one of these nice ladies with the Cross Plains Centennial Quilt, displayed in Mr and Mrs Howard's bedroom of the home, to which she had contributed a square. Each block was made by local women to celebrate the town's history, and its recovery from the devastating wild fires that burned 130 homes and killed two people in 2005. 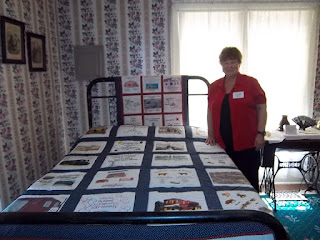 We wrapped up the day with the Barbarian Festival in a lovely, oak-shaded park, complete with live music, free watermelon (courtesy of AMA-Techtel), Conan the Barbarian artwork, and fabulous food. There was even a car show. This is an annual event and it was a lot of fun. I hope we will be able to go again from time to time! 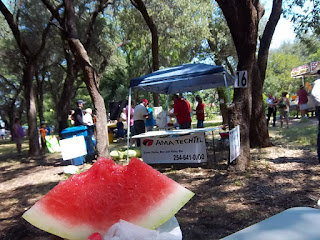