Governor Perry Isn't the Only One Praying 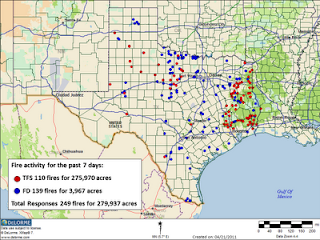 At least two volunteer firefighters have lost their lives already. Whole towns have been evacuated. More than 400 homes have burned. And the wildfires in Texas, driven by continual high winds through a drought-stricken prairie landscape, show no signs of abating.

So, yes, we absolutely need prayer and are grateful to Governor Perry for his call for prayers on the next three days : Good Friday, Holy Saturday, and Easter Sunday, to ask God for rain.

We've all been praying for rain for weeks. Where there aren't fires, the cattle need water... it gets worse: people need water. Some lake-side folks whose water comes from small, individual reservoirs (ponds/creeks) are having to haul water in for their home use.  At work, we receive daily updates on the critical condition and are prepared for evacuation if necessary. The dangers of fires that not only can burn the length of a football field in less than a single minute but that can turn into the inferno known as a "Fire Storm" is real and immediate.

The UK's Daily Mail has had the best coverage of the fires ( I guess most of the US media thinks it is just "local news" since the fires aren't on the West Coast).  A down-under paper, The Australian, has a fine and compassionate article as well. And Fox, of course, carried reliable coverage.

It was a challenge to find news articles about this that were not sneering and turning this into some political event:

Some guy at The Atlantic Wire had this to say " It's worth noting that a few days ago, Perry asked the federal government for help in fighting the wildfires. So it's not like a public call to prayer was his go-to here. Then again, is it the logical next step? The period he's outlining does fall between Good Friday and Easter Sunday--so it seems like if a miracle is going to take place, that would be the time for it. That may not offer solace to those troubled by the movement along the church/state line, though. We hope that rain and relief do come to Texas, however it happens."

Not only civil, but gracious, too.

And Reuters couldn't resist a political dig in the 3 lines it deigned to give the thousands of people impacted by these fires. 1.5 million acres scorched, more than 250 individual fires stretching across a state bigger than any but Alaska, but Reuters wanted to be sure its readers knew that "Perry, a Republican, sought increased federal help in combating the blazes last weekend and urged Texans to ask the same from a higher power over the Easter holiday weekend."

Thank you Governor Perry, for this proclamation. It shows that you are still able to see what all of us in Texas are already doing. We appreciate your willingness to do the right thing.

In today's world, where the pictures and stories are instantly available worldwide, you'd think they'd have a little more human decency.  I guess that is another one of those rare-earth-minerals that only the Salt of the Earth still have in abundance.

"Get up. Always. Get up."
~ Ty Murray, on what to do when thrown off a bucking bull

"Once you start moving, you aren't afraid anymore."
~ Chris Norman, Britisher who, even though unarmed, helped subdue an armed Islamic terrorist aboard a French train.
“Walk toward the fire. Don’t worry about what they call you.” ~ Andrew Breitbart |